buy online Misoprostol 20 mcg It has been a funny start to the season and as always not gone to plan. Ellie who we were preparing for Novice has had a minor niggle and is only now coming back into full work. Fliss meanwhile has overachieved and what we had planned.

http://thmiii.com/wp-json/wp/v2/pages/805 She was lightly run last year with only two BE outings going double clear in her 80 and 90 run. This season we planned to start the season at 100 with the aim of moving to Novice by the middle of the year. As well as eventing Fliss she also is great fun to show jump and has progressed to jumping Foxhunter (1.20) level which is very exciting and feels like it is getting quite serious.

We started the BE season at Bovington, the event was rather overshadowed as the night before on arrival at stabling we lost our recently homed rescue dog Rosie. She managed to escape from the lorry and run to the woods where despite many sightings we were unable to recapture her. The Dorset community and Dog Lost organisations were fabulous but it was actually 5 days before we managed to recapture her and honestly I think we were very lucky we got her back. You will see in the picture she now wears a GPS tracker. We did manage a run at Bovington and had a fairly uninspiring double clear with minds very much elsewhere.

A week later with Rosie very ﬁrmly secured we went to a boiling Bicton horse trials for Fliss’s second BE100 event over a much more testing track. A 31.5 dressage (despite a rider error) was them complimented by another double clear for a very pleasing 4th place.

Fliss gave me a great feeling at Bicton and with her amazing scope I made the brave decision to go Novice earlier than planned and we promptly entered Howick at Novice level.

The nerves jangled ay Howick as been 5 years since I have jumped a Novice track, actually it was the dressage that caused me a lot of concern being one of the more advanced tests with mediums, sideways and extra halts. We were 3 on just after 8 following 2 professionals into the arena, I was actually quite chuﬀed with 36.3 that wasn’t too oﬀ the pace.

Considering show jumping was the phase that we were most comfortable at it caused us a few green moments. The treble was going up the hill and rode very long and we struggled to get through but she managed to pull her legs in and stay clear. Actually there were very few clears only 35% at Novice with the course and treble causing problems.

Cross country she really aced the course ﬁnishing only 18 seconds over the time. Slightly green at the water but otherwise totally justiﬁed my decision to step up to Novice.

So plans looking forward for Fliss is to establish her at Novice with our next run at West Wilts. We will carry on with focusing on her training particularly if we have a long hot dry summer again but we will also be show jumping including a few of the bigger shows. Ellie hopefully will pick up again in the second half of the season with a few 100s and then look at upgrading to Novice. We have some exciting training planned including more with Caroline Moore and hoping to take one of them to the Events Challenge at Blenheim

Huge thanks to Super X Country for their continued support. I am loving the new range. 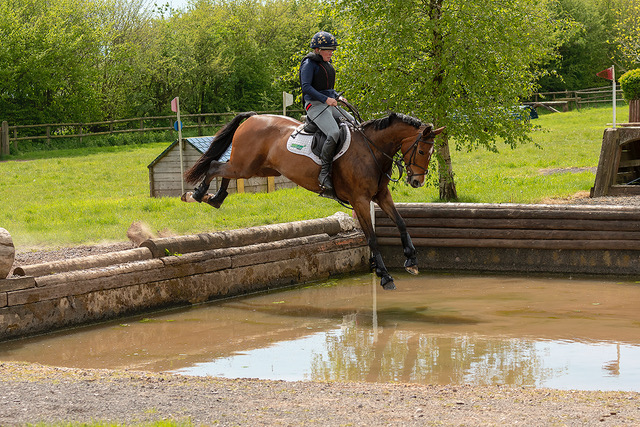