Well what a crazy start to the season it’s been!

At the backend of last season I received my new gorgeous personalised colours from Super X Country that I designed myself! They had been hung up in the wardrobe desperate to be worn, so I couldn’t quite contain my excitement for the first event of the season at Burgham in March!

Being temperamental British weather, March didn’t want to play ball and Burgham was pretty much under water so was abandoned- But hats off to the organisers of Burgham for all their best efforts in turning the International classes to a Combined Training event down the road at Alnwick Ford. Not only did that leave me with two runs before Badminton in May,  it meant I had to wait an extra two whole weeks before I had the chance to wear my colours again!

First event of the season was Breckenbrough in which we just took Arkmire Mr Slipper- Henry. We have worked so hard over the winter with his dressage so it was time to see if it had all paid off. Henry did a beautiful test, and stormed a clear SJ (even with me loosing a stirrup mid way!). Then back to the wagon to have a cheeky glimpse at BDWP to see if any scores were up… To then find I was leading on a 22.3 dressage, I couldn’t quite believe it! At this point in time we weren’t in a fortunate position to have been XC schooling with very few venues open up north, so I tried not to let the result get in my head too much and just to respect every fence especially considering Henry hadn’t been XC since he qualified for Badminton early September. Anyway, I don’t know what the fuss was about as he made it feel all too easy and went clear with 1.2 time to win our first event of the season by a fair margin!

Next up was Dalkeith, a truly beautiful event nr Edinburgh. I’d only been once and it was one of my favourites! This time we had Henry going for his final Badminton run and my just turned  5yo 14hh project pony Hillgarth Rachelian aka Elle.

Henry was up first for all 3 phases, his dressage was nice but sadly the arena was on a slight gradient meaning going down the hill he ran a little on his forehand, but still pulled out a very respectable 28.8. Showjumping was, erm… Interesting?! Northallerton which is closer to us was the same weekend at Dalkeith, but Henry had been giddy once or twice on grass before so we drove the extra hour to vouch for Dalkeith with all 3 phases being on grass. Henry had a whale of a time in the showjumping and had two down. He made ease once again of the XC to finish in the time which had proven very hard and still felt full of running and we were chuffed to still come back with a 10th.

Next I moved onto Elle who was doing her first ever event so just the BE80T as I had no idea how she would cope with travelling with company for the first time, nor the atmosphere. She did the most wonderful test, a little wobbly in places- mainly because she is such a big mover to score 24.8 putting us right up there. I had no aims jumping wise, she is very bold and rarely has a pole but in competition circumstances, having never seen tradestands etc I just wanted her to have a good run. SJ she flew it with brilliance, took me by surprise as just acted like a total pro and gave all the fences about an extra 3ft to go clear. The XC at Dalkeith for the 80 was definitely influential, plenty to look at with beautifully dressed fences it caused a fair few problems. But I don’t know why I was getting myself into a flap as she went perfectly clear and I couldn’t fault her one bit, crossing over the finish line it was announced we were in the lead and couldn’t be beaten- I never dreamt of her being placed, let alone winning her first BE event!

We then had a crazy 2 weeks of sorting everything out for Badminton. We were due to do all 3 phases on the Wednesday, and having arrived on the Monday it meant on Tuesday we could have some down time and do several course walks.

Henry seemed totally at home at his first ever stay away event, as long as there’s food that’s all that matters! We walked the course two times on the Tuesday and gave Henry a hack first thing, then gave him a jump in the afternoon. One thing is for sure, the XC was every meaning of the word tough. I’ve been very lucky to have ridden at Badminton once before, but this year the course designer was extremely clever with the use of jumps and ground. It made when I did it on Cefncoch Crusader in 2014 look like a walk in the park! It was skinny, after skinny after skinny. Very few let up fences, and the two or three let up fences there were, the ground changed so you had to angle it or prepare for the next fence almost immediately and they were max height, max width.

Henry did an okay dressage on Wednesday morning, it was very cold and windy a sudden change from the weather we had been having. He was slightly tense, especially over the first few movements and I was a little disheartened as I finished knowing how good his tests can be. The judges were marking extremely harshly with only 2 or 3 in the 20’s, so I was pleased to see I had scored a 33.8.

In the SJ I tried a different approach in the warm  up which had been hugely helped by some tips by Charlotte Ridley at Parkend Equestrian the week before which really paid off. Henry jumped out of his skin around a 10 fence course. At fence 8 having jumped a huge oxer uphill we were running a little forward and I saw a forward but perfectly managable stride. Henry went to take off, and then decided to have a change of mind and opt for a short one so we battered the front rail of an extremely upright vertical. Fence 9 we regained our balance, and Fence 10, the last was a double but very spooky and a lot of horses were darting out last second. Just to remind Henry I gave him a tap on the shoulder a stride or two out, and he knocked the front rail having not snapped up by being distracted by the whip so we finished with 8 faults. He is an extremely neat jumper, and rarely has a pole, but myself and his owners were over the moon with how he jumped especially compared to Dalkeith as overall 2 poles meant very little at Badminton.

Next up was the big test.. XC! I didn’t really know if my Plan A’s would be Plan A as I wanted to see how he would tackle the first 8 fences.. Having cleared them without hesitating once I began seeing how good a ride he was giving me. We came across the finish in the time having done one long route (at a fence I was never even going to attempt the direct route). I just couldn’t believe it, not only was I clear, but I went through the fences in my head and there wasn’t a single fence I thought we had a moment or a hesitation at- He truly bossed it! And what was even nicer is even after a 7 minute long XC I wasn’t in any rush to get my gear and baselayer off because I just find the SXC colours so comfortable and cool post XC!

Next on the agenda was Floors with just Henry alone, the most stunning event I’ve ever attended with the most amazing course and brilliant atmosphere. Henry finished 3rd in his section at Floors last year, and I had won another section on Solo last year too. This year having been around Badminton what Floors felt like was a full up bold XC course last year, suddenly walked a lot smaller and easier, but I still wasn’t taking anything for granted! Henry did a lovely test, I knew some improvements to be made could have scored us higher, however going into the SJ they announced we were leading on 23.8 which is what we finished on after a cracking double clear to take the win! Not only did we win, but we won by almost 10 marks as second placing was on 32.3, just made the day even more special- Floors certainly seems to be a lucky event for myself and the horses!

Most recently (and lastly in this blog), was Warwick Hall (1) which we attended with just Elle alone. Henry had 2 weeks downtime with his owner after Badminton enjoying hacking as his next event was a month later, which allowed me to crack on with my lot a little more.  Elle was once again in the BE80T. After her last run I felt she was more than capable of BE90 but I wanted to make sure her last success wasn’t a fluke, and just to get her another run seeing different fences and atmospheres.

Another very reliable and consistent test scored us 28.8, the only sub 30 in the section putting us well in the lead. The SJ was very tight and quite twisty with not much time to prepare for the next fence, however she jumped clear. Warwick Halls XC was very much different to Dalkeith with it being a much more galloping course with big open stretches but plenty of combinations inbetween. We set off and instantly she caught me by surprise, she seemed to be enjoying herself- but a bit too much! She’s ridden in a Bomber Happy Tongue (which effectively is a straight bar with a port in for tongue relief), and that day out of all days she realised she could run through the bridle and ignore it!

My body clock is used to 450m p/min at BE90 speed, so Im very aware of trying to steady for BE80 speed,  but Elle definitely had it in her mind about Novice speeds! It was a VERY bold round, I had to take a lot more extra time setting her up and trying to get her back together again for the fences, so I knew fine well we were going to be well ahead of our original minute marker plans. I wasted some time at the water by respecting it and trotting through and 3 fences on and across the line it was announced I picked up time pens.. for going too slow after all that!!

We picked up 1.2 time to finish on a score of 30, which was still enough to win. That made it her second BE event and second win, I never would have thought that of the pony I picked up for £650 in August last year!

So far my SXC colours have proved very lucky once again! When I got my first set of SXC Colours back in 2013, the first time I wore them I won my event on Cruise. So to have had 5 BE runs this season, with 4 wins I think they must be stitched with pixie dust! 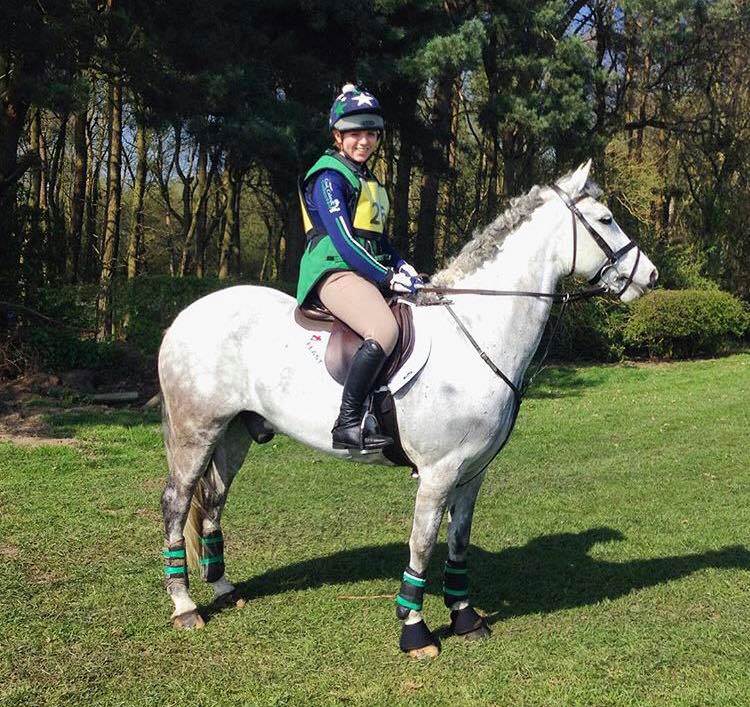