Ihiala I am always keen to portray the ups and downs that go with eventing and be honest about the things that don’t go as well. However reflecting on the start of the season I have to say it has been very positive with both horses going really well and making progress. Considering over the winter my confidence was at rock bottom and I was close to giving up this has been a welcome change.

What has changed, I still work hard and train them in the same way maybe at last some of it is sinking in. I had a few amazing lessons in the Spring with Austin O’Connor the Irish International Event Rider which really helped set us up for the season. I have also worked harder than ever before on my own fitness with my local fitness centre doing crossfire classes, gym work and I even completed a 5k in June. Considering since I smashed my hip a number of years ago I could barely run a step to run the full 5k was quite an achievement.

Fliss I have taken slowly, she needed time to muscle up and develop, although she is 7 now she was weak when I had her and would have suffered both mentally and physically from too much too soon.

She is a natural jumper although getting her too and from the fences has taken more time. She has started her British Showjumping career and having registered in April in 2 months has completed 4 double clears at British Novice and 4 at Discovery to qualify for next years second rounds. She is about to start jumping 1.10 classes.

Eventing wise we hit a problem early on. We went arena eventing at Pontispool in the winter and she refused point blank to get her feet wet. She wouldn’t follow other horses in and in the end would only follow me on foot. This might have been less of a problem if it wasn’t freezing cold and I was wearing short boots. Luckily with a wet winter there was plenty of puddle training and when we visited Attington to train with Austin I lunged her in his huge water complex and then rode her in it every day of my stay. This weekend we finally did our first BE!

Dressage warm up was kept to 15 minutes and she was going sweetly until a grey pony starting working nearby, no idea why but she took fright, her head up in the air and really spooked. Luckily she settled to go in the arena and produced a nice test for her stage of training. A bit wobbly at times but great to have a judge that rewarded the good bits so marks ranged from 5.5 to 8. Very pleased that one 8 was for my riding. 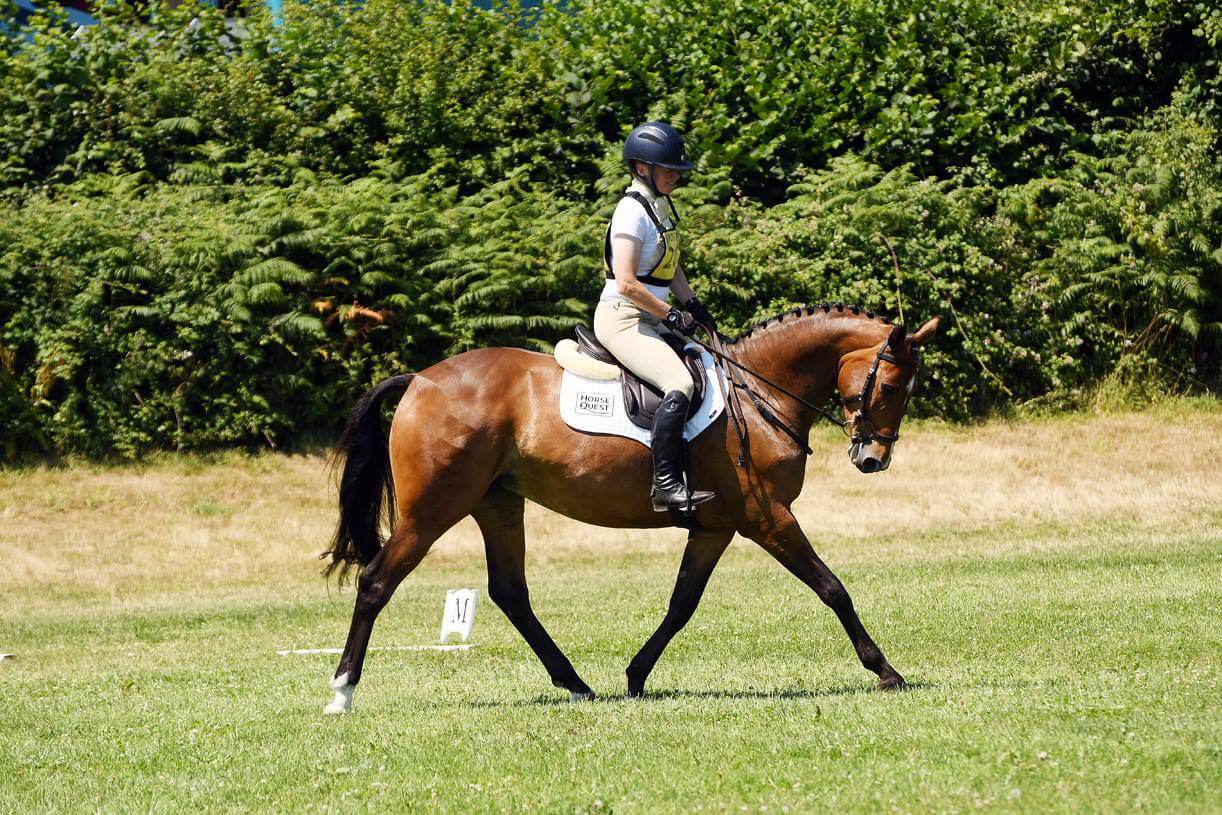 We were one of only two combinations to break the 30 mark with a 29.8 to leave us 2nd after dressage.

Show jumping was small for Fliss but was very pleased with how she jumped, sensibly neither treating them as insignificant nor over jumping. She didn’t touch a pole though for a clear round.

Cross country was a decent track for the level with lots of questions particularly for a horse that was yet to have any sort of round cross country. 1 and 2 were decent size and she backed off and needed strong riding, however once away she really focused on the job in hand and took her fences on. The water was early at 7 and although she backed off for half a stride she trotted straight in and was away. The rest of the course she jumped sensibly with a big grin on her face, we took it steadily due to ground, heat and experience and clocked up 7.2 time penalties. This was still good enough to finish 3rd which I was over the moon with.

Ellie meanwhile has gone from strength to strength this year and shown a huge improvement. At 14.2 my project pony has now been with me for over 2 years – whoops! This season she has won several British Novice classes, completed her Discovery double clear and had a very consistent time in her BE events,  Sadly like everyone else our early season has been badly affected the weather with several events cancelled. So by the mid season point we only have had 4 runs.

In both her 90 outings she was double clear and placed 2nd at Bicton and 6th at Port Eliot. We moved back to 100 at West Wilts where two pesky time faults SJ put us out the placing but never the less delighted with another double clear. It finally all came together at Treborough.

Treborough is a lovely event with fabulous views and despite the recent dry spell the ground was pretty amazing.A quick walk of the course and I thought it was nice, a step up from West Wilts but not as consistently huge as when we came last year. Interestingly show jumping was causing a lot of problems as the time was very tight and actually in the end statistics sowed only 27% went clear jumping and time which is quite unheard of at this level.

Weather was pretty warm so I didn’t overdo the warm up for dressage literally a 5 minute stroll to the arenas and 10 minutes work and we were in. Ellie produced a nice accurate and obedient test still dropping occasionally on her forehand but much improved from West Wilts

We didn’t know our score when we went to show jumping but we scored 28.5 which was about 6th best in our section. I know Ellie even on generous timed courses can pick up a time fault and I didn’t want to hurry her and have poles instead. I tried to jump economical lines and after fence 4 I did a bit of a jump off turn to save time. It worked and although we rattled the last hard we finished clear jumping and clear time. Lots of pats for the clever pony,

I still at this point didn’t know my scores so managed to log into ‘Eventing Scores’ to see I was leading the section, I knew if I was clear inside the time and I couldn’t be beaten! Now this may sound easier that it was! With the best will in the world we have never the quickest combination cross country (I do like to set up for a fence a little much) and the cross country time at Treborough was proving hard to get. With only .2 in hand over 2nd place I couldn’t even afford a second over the time. I did work out I had 10 penalties in hand to assure ourselves of a rosette. My competitive instinct kicked in and I tried to ride as I did at West Wilts letting Ellie run and jump.

We went out over the first 3 in a good forward rhythm with not too much interference from me, the step up to skinny at 5 needed a little more control before we were away again. Some simple fences and we came to the corner she popped that nicely and I managed to make a turn inside the 80 fences to save time to the step and brush, she made the distance here short but jumped brilliantly. The water is unusual at Treborough as the quick way involves a jump down a step, she hesitated but went and we were soon away again up the hill over the roll top and then the camera picks us up again before the influential log ditch log combination which caused some fair problems over the day. Well the only problem we had was the distances seeming short again as flew through. We headed to a double of logs on a right angle and had a slight miss on the first element but again took an economical route and flew the 2nd element, over the coal pallet fence and then to a big penultimate fence, I am afraid I did fiddle a little to this and show jumped it then pushing on for the last to come home a second under the time. We had won!!!

We were the only person to finish inside the time XC in our section, also of the 3 BE100 sections on the Saturday there were only 6 competitors (out of roughly 100 horses) that finished on their dressage score.

We had some lovely prizes and Ellie was rewarded with her favourite treats (stud muffins). So delighted it all came together on the day in all phases and allowed us a win which lets face at BE is something to be savoured and appreciated, it is my 3rd career win in over 20 years of trying!