Michelle- The good, the bad, the painful

My 2019 season has been somewhat different, get ready it’s a long one!  At the end of last year I moved to Northamptonshire so I was looking forward to exploring some new events this season, meeting new people and all importantly heading to Badminton grassroots in May which we qualified for last season.

All started well, we headed to Epworth in March (nowhere near Northampton I know!) and headed up the centre line for the first event of the season, track right….oh no…..Of course, it was left!! Onto SJ and a couple of fences down as Promise and I discussed brakes, then flew round the XC with a lovely clear to finish 14th.

Onto our next event and one of my Favourites, Norton Disney.  Promise did a lovely test for 25.5 and then show jumped really nicely for a clear round – yay! Then onto XC, I had been struggling with her a little XC and decided to try a different bit…note to self, don’t do this for the first time at an event! She actually went great but I didn’t have a great deal of control and we almost got time pens for going too fast, anyone who knows me knows this is very rare!!  So, with no penalties to add we finished 3rd and a regional final ticket in the bag to add to the one we had from Frickley last season 😊

That is where my season stoppe 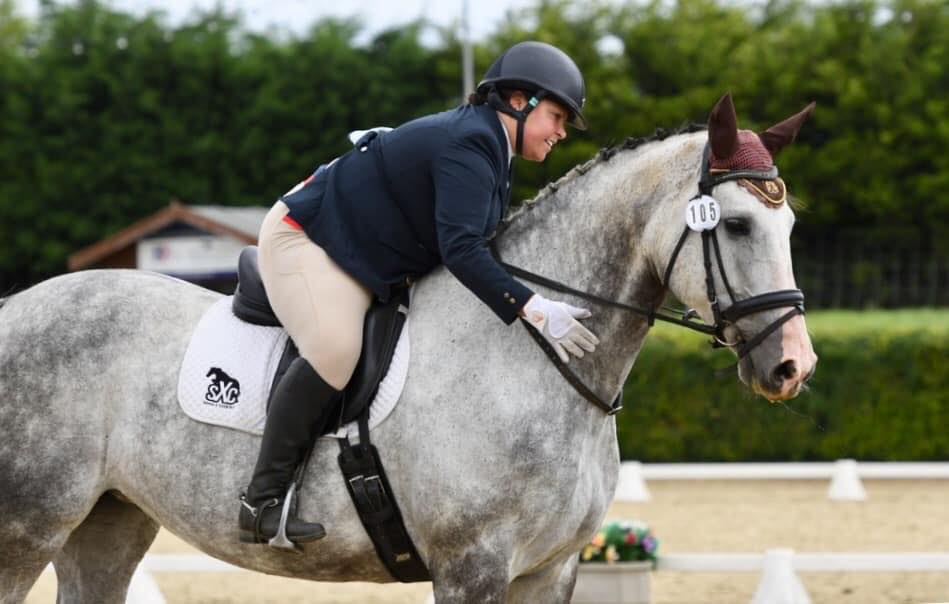 d for a while.  The next day Promise had a well-deserved day off and I rode Ricky (Our beautiful 5yo giant who is still growing like a weed and will take the eventing world by storm once he stops!!) with a friend and we had a horse swap.  Unfortunately the other horse was a bit full of herself and she reared and lost her balance and came down on top of me.  I was incredibly lucky to come away with ‘just’ a broken femur.  The Kettering hospital team were incredible in looking after me, I love gas and air, and less than 48hrs later I was in theatre having a rod inserted to stabilise the break.  I love morphine! I did however have to have my favourite SXC leggings cut off….first world problem I know, but I loved them!!

It was the weirdest feeling being laid up like that for so long, but actually has taught me going forward that you can only do what you can do and not to stress in between, standing back up was horrible and I passed out the first time.  Ironically the last thing that was on my mind was getting back on a horse and I don’t think I have EVER thought that!!  Obviously no Badminton for us  ☹  Although it was great watching all the action unfold from bed; the big one was great, I’d love to be as brave as those guys, and fellow SXC rider Laura and her gorgeous Stan scooped the title in the 90 class – well deserved!

Fast forward through lots of rest, physio and visits from lovely friends and family I was back to work at the end of June and on crutches so that wasn’t too far from getting on a horse was it?!

In July I practised swinging my leg over the arm of the chair to imitate getting on like I did when I was little and I survived so it was the next logical step to get on a horse, I was obviously feeling lots better by this point!

Promise was the Princess that she always has been and stood like a rock while I clambered on, we walked and I even had a little canter, but rising trot was going to be something to work on, acceptable I thought given I couldn’t walk unaided.  There were a few tears that afternoon for sure.

3 weeks later and we headed to Keysoe for a dressage competition, I was thankful for my super comfy SXC leggings, perfect especially over the big scar I now had running from my hip to knee, no seam was a blessing! Promise was fab as usual, I was wobbly and super tired after just that one test but we did it! And a red rosette to boot 😊

After that I felt like I would be okay to pop a little fence at home, we survived, so I wondered if an event before the season was out was out of the question…I still had 2 regionals tickets to use!  I drafted in Pip to take Promise for a run out at Frickley first to check she wasn’t going to be wild (!) but we need not have worried, she was perfect, a 30 double clear and just pipped (no pun intended!) into 2nd place! As ever the prizemoney is fab at Frickley and we left with £100! Pip you are a legend, I don’t know what I’d do without you!!

Unfortunately, despite trying to be more organised I didn’t enter Little Downham in time and so we were in a normal 90 section not a RF.  Off for dressage, she was mega, did a lovely test for 25.3 so onto SJ – my nemesis especially after a normal break let alone an actual bone break! She jumped her socks off, I don’t think I breathed all the way around – CLEAR! Then on to XC, I knew I was nowhere near fit, but I had schooled so I just thought I would have a nice run round and what would be would be.  We started off fab, then around fence 7 I was suddenly so tired, everything ached but I was desperate to keep my weight off her back so I just bridged my reins, like I used to when I rode out the racehorses when I was younger (and lighter!), and just wedged myself into the knee rolls.  She was amazing, again, and just carried me round.  She is such a legend! I knew I would be way over the time but for once I didn’t care, we had done it!! 6 months pretty much to the day since my accident I had completed an event – woop!!  Embarrassingly I forgot my SXC colours so won’t be posting that XC pic on this blog! We finished 9th so even got a rosette!

I still had two regionals left but unfortunately the weather gods had other plans. We did go up to Weston Park which was beautiful, but I was in quite abit of pain after the dressage and Promise was feeling a bit fresh, so we left after a 28 dressage – there is always another day.  We had an entry for Aston RF and if anywhere would run I know it would be there, so when they cancelled it was obvious how bad it was.  I have one more precious regional to use at a rescheduled event in the Spring – Stafford.  So all roads lead there!

I can’t even begin to thank the amount of people that have helped me achieve what I did this year, its been crazy! The hospital, Physios, work colleagues, friends and family have all been amazing in keeping me happy, Promise cared for and to be able to do what I love – I feel VERY lucky!!

Finally thank you again to Becci from SXC who has supported me for several years now and provides me with the nicest quality riding gear and brightest XC colours (so mum can spot me!) as well as loads of support and friendship, you’re the best and I can’t wait for another year representing your fab not so little company 😊

Off to dig out my SXC winter gloves and get training – next year is going to be awesome, I am on it with a fitness plan to be the best I can be, and hopefully Promise is up for joining me!!